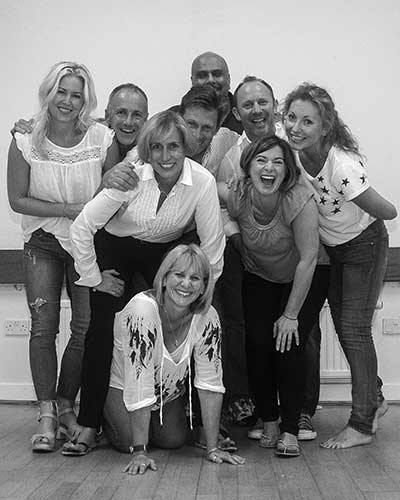 The Thursday Night Project was started in Thames Ditton in 2015, in response to some local Dads wanting to learn about drama. Seven years, over 100 workshops and 5 productions later, it is attended by a diverse mix of men and women who travel from as far afield as Dorking and Wimbledon. The Project is run by professional actor Richard Brimblecombe, who provides the group with a wide cross section of experiential learning, including improvisation, text work, stage craft, acting for film, trust, focus and how to develop a character. The workshops can be intense but are always fun. They give everyone the opportunity to develop their creativity and refine their performance skills. Much of what is learnt has been found to be useful beyond the confines of the workshops.

TTNP focuses on developing skills, broadening horizons and stretching the members to be the best they can be. The emphasis is not on performance. However, to put what is learnt to the test, a performance element is inevitable – and that is how the productions of AFTER LIVERPOOL, HEADS, GAMES, EVERY BRILLIANT THING and RAVING came about. The group has performed at The Rhoda McGaw Theatre Woking, The Thorndike Theatre in Leatherhead, the Albany Theatre in Coventry and even the Lamproom Theatre in Barnsley. This year, The Thursday Night Project is hoping to find a permanent home at the ESHER THEATRE.